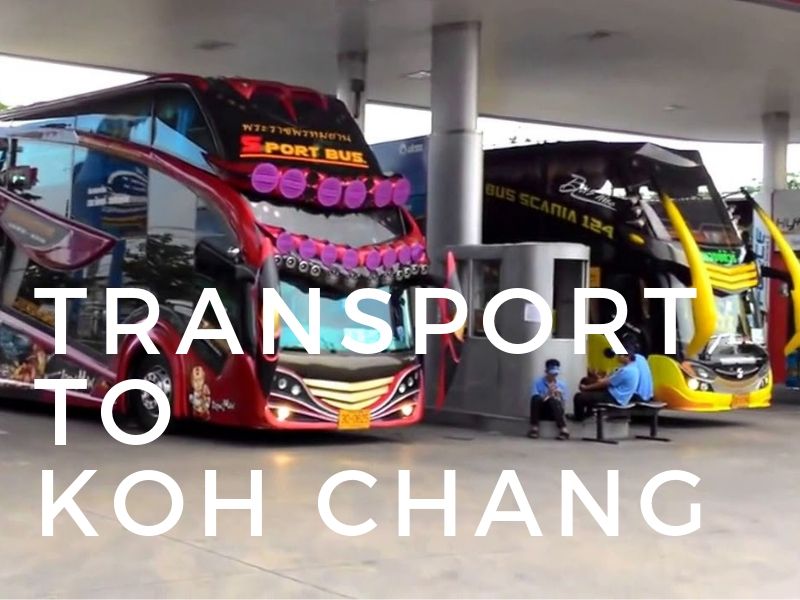 Transport from Bangkok to Koh Chang

Travel by public bus from Bangkok to Koh Chang:

From the Northern Bus Terminal in Bangkok ( Mochit ) and the Ekamai Bus Station in Sukhumvit Road , every hour from 5:00 am to 11:00 pm aircon buses for 200-300 baht drive to the provincial capital Trat (also known as Trad), which is about 345 km away . Some of these buses (such as the 99 Express Bus) also stop at the ferry (pier) to Koh Chang.

The buses to Trat have their destination at the Trat Bus Terminal, from where shared taxis (so-called “Songthaew”) for little money travel to the ferries (Leam Ngop) of Koh Mak, Koh Kood and Koh Chang

The Ekamai Bus Terminal is located near the Sukhumvit , right in the center of Bangkok. Every hour from Ekamai there are big buses to Trat , Koh Chang and Pattaya .

From Mochit Bus Station (via Suvarnabhumi Airport) to Koh Chang:

Private transfer by taxi or van to Koh Chang

Probably the easiest and most convenient way to travel to Koh Chang is a private transfer by car or minibus. The driver can pick you up anywhere in the city or from the airport and bring you directly to Koh Chang.

You decide on the departure time and also on stops on the way, the driver is only responsible for you.

A private car (1-2 persons) is available from THB 4600 directly from Bangkok to Koh Chang.

Everything is included in the price:

For a larger group there is also the possibility to book a private minibus . For example, a minibus costs only 6100 THB and the bus can accommodate up to 9 people.

Transport by shared minibus from Bangkok to Koh Chang

It is also possible to take the minibus directly from Bangkok Airport to Trat / Koh Chang. The journey time from the airport to Trat is 5-6 hours.

The journey from Trat to Koh Chang takes place with ferries from two piers near Laem Ngop, which can be reached from Trat by minibus, shared taxis or taxi.

Most of the traffic is handled by the two Dan Kao piers . The boats need about 30 to 45 minutes from Laem Ngop to Dan Kao Pier (Tha Dan Kao).

By plane from Bangkok to Koh Chang

From Europe, USA, Australia etc. several airlines fly relatively cheap to Bangkok every day (from 500 Euro round-trip flight). Thus, the Thai capital has become the linchpin for travelers to Asia in general.

Anyone who wants to go to Koh Chang today has it relatively easy. The Bangkok Airways flies several times a week, three times daily from Bangkok Airport to Trat.

From Koh Chang to Cambodia

Onward journey: A further trip to Cambodia is also very easy and cheap, because the island is indeed on the border is in about 8 hours in Siem Reap (Angkor Wat) and also in a short time by bus in Sihanoukville ( Koh Rong ).