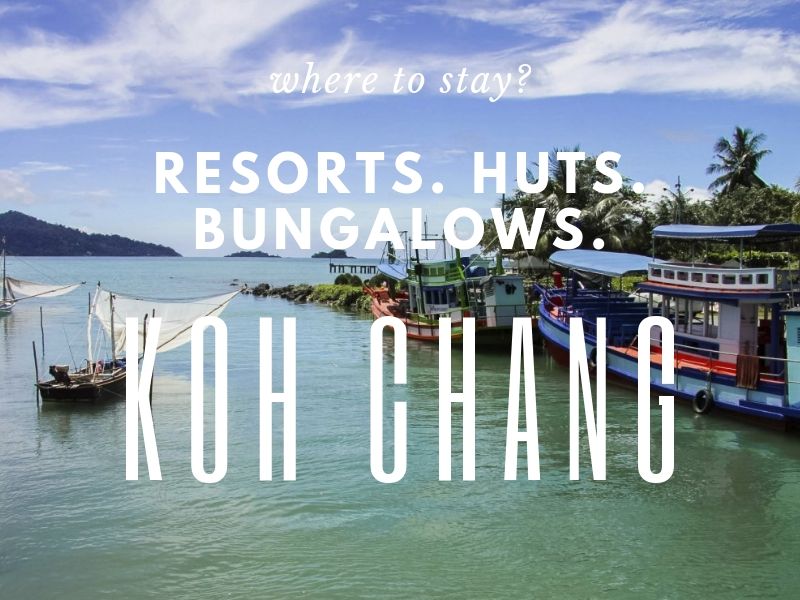 Koh Chang – เกาะช้าง – is the largest island in the Koh Chang Marine Park archipelago which comprises 52 islands. Koh Chang was named for the elephant shape of its headland, although elephants are not indigenous to the island. Best visited outside of the monsoon season — which runs from about June to September — the sea is warm and clear, the beaches for the most part white and sandy and the interior is filled with National Park protected forest and craggy, picturesque mountains.

Most of the beaches are on the western coast, and each has built up with a distinctive atmosphere based on shopping, activities, partying or chilling out. Accommodation offers a style to suit every type of traveller, from independent low budget backpackers to those wanting a touch of luxury. There are plenty of activities to be organised from almost anywhere on the island: snorkelling and diving trips to nearby coral reefs, jungle treks and elephant rides, not to mention various beach sports.

With it’s long stretches of sandy beaches and bay, Koh Chang’s west coast has become the focus of the development boom, and that’s where most foreign travellers stay on the island. Beaches such as Haad Sai Khao ( White Sands Beach ), Klong Prao and Kai Bae have developed more in the past few years than most of Thailand has in the last few decades. If you want to party, swim, dive or do practically anything else you’ll find somewhere that’s perfect for you.

There are three different and definitive vibes from each of the three main west coast areas; White Sand beach, Kai Bae beach, Klong Prao and Lonely beach / Bailan. White Sands is more modern than the others, reminiscent of Kuta in Bali, or indeed its aspired cousin, Phuket. The Kai Bae and Klong Prao strip is gorgeous on the eye with its quaint village appearance, plenty of quirky shops and bars — certainly more of a tropical island vibe. Lonely Beach and Bailan Bay continue on the topical island theme, but are far more traveller orientated; less souvenir shops, more bars playing Bob Marley. No Italian restaurants, but an abundance of affordable Thai fare. Ultimately it’s a backpackers heaven.

The east coast is home to major Thai villages but few beaches and so attracts far fewer foreign travellers. This side of the island is popular with Thais from cities such as BangKok and Chiang Mai, who might never have seen the ocean before and want to join in traditional Thai seaside life.

Sea Eagles, monkeys, epic views and jungle noises are all around, and if you’re lucky you may spot the majestic Great Hornbill, resident of Koh Chang but rarely seen. Koh Chang is somewhere you can let your hair down a little, where perhaps those who hit the road in years gone by can capture the spirit of this wonder that we call travelling, yet enjoy the facilities that they yearn in today’s society… namely air-con, hot water and a comfortable bed, and all found in abundance in White Sand, Klong Prao and Kai Bae Beaches. At the same time, the old scene still exists at places like Lonely Beach, a reminder of what got the ball rolling in the first place.

A word of warning, the roads on Koh Chang are treacherous. The steep gradient of the hills can be very dangerous, particularly during the rain, and every year there are fatal accidents; during our research through mid 2008, three people died in road accidents in one week — serious statistics. If you’re not an accomplished and experienced driver then this is not the island to start to learn.

Cars and minibuses travel at breakneck speeds around the island and coupled with the hundreds of motorbikes whizzing about it becomes quite hazardous. Particularly bad stretches of road lead from the ferries to White Sand Beach, between Kai Bae and Lonely Beach, and the stretch from Bailan Bay to Bang Bao. With numerous hairpin turns up high on the cliff there is no room for mistakes. Taxis are a far better and safer option for getting about for the inexperienced. Also worth bearing in mind is that the clinic charges a 4,000 Baht fee just to walk through the door for accident victims, even if all you need is a light bandage and some antiseptic.

Through the last decade, a wave of travellers, both international and domestic has washed over Koh Chang in ever increasing numbers, and its popularity will only continue to grow towards its government driven target of becoming the ‘next Phuket’.

That said, Koh Chang has much more of a tropical island feel than its larger cousin Phuket. Phuket Island is a province in itself, with an intricate network of villages and roadways — Koh Chang didn’t even have a main road twenty years ago!

And if you are thinking of moving to Koh Chang, check the property guide at our friends at KohChangRealEstate.com